Chill with our Brewery Chillers

In recent years, the U.S. has experienced a boom in the number of breweries.  Did you know George Washington brewed beer at Mount Vernon and Barack Obama brewed beer at the White House? The first commercial brewing equipment came to America in the 17th century.  Beer became more widely-consumed after the Civil War as immigration and industrialization came to the U.S.  In the 19th century, refrigeration and pasteurization also contributed to the increase in production. 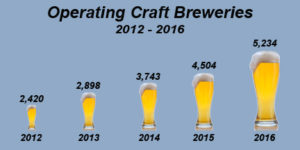 Although alcohol production was briefly halted during Prohibition, it saw an increase after WWII with the rise of large national breweries.  Whereas beer was previously sold on-tap, demand for canned and bottled beer increased after home refrigerators became mainstream.  Lately, microbreweries and home-brewing have gained in popularity.  Because temperature-control is critical to fermentation, chillers are necessary for beer production.  A chiller is a cooling system that removes heat from an element which circulates that element through a heat exchanger to cool the air or equipment.  Chillers have a temperature range based on the boiling point and freezing point of the heat transfer fluid.  It is essential to choose the right size chiller and glycol percentage.  Glycol is a food-grade anti-freeze that comes in two forms: ethylene and propylene.  Ethylene is commonly used in industrial applications and propylene is commonly used in the food industry.  It’s often added to water systems because it can help prevent damage to pipes since it reduces the freezing point.  The glycol percentage is crucial because too little glycol could freeze the chiller, causing it to rupture, and too much glycol reduces the chiller’s efficiency.  Glycol can quickly carry heat away, which is why a glycol/water mixture is often used in breweries.  If you need help sizing a brewery chiller or determining the glycol percentage, read more information at https://bvthermal.com/how-to-size-a-brewery-chiller/ or contact BV Thermal today!